On Thursday and Friday, the field will split their time between the two courses. Everyone who makes the cut will play their weekend golf on the South course. With three of the four rounds being played at the South course, we will primarily use our key stats to account for that.

The South Course is one of the most difficult ones on tour. Playing 440-yards longer than the North Course, this is the type of venue we would see used for a U.S. Open. Consider this a bombers paradise. Poa Annua greens help to neutralize some of the disparity in putting between players. Essentially bad putters don’t face the same disadvantage on the greens as they usually would. In general, I don’t put much stock in putting stats, a lousy putter can get hot for a weekend, and a good putter can go cold. Driving distance and stats of that nature will always remain constant. Dustin Johnson will bomb every-drive, every-time. It isn’t to say putting is irrelevant, it is just a much more difficult stat to process, and for a course like this, it further diminishes its statistical importance.

The North Course can be viewed more as a plodders course. Good iron play and strokes gained around the green will be at of a premium. We can’t wholly discount the North Course since 18-of-72 potential holes will be played here. This course statistically plays about three-strokes easier than the South Course, so when you get your round in over there, you need to make the most of it.

Tony Finau (35/1) One and Done Selection

Tony Finau’s breakthrough win is coming this year. Yes, I know he won the 2016 Puerto Rico Open but that doesn’t scream, “I have arrived.” Finau is one of the biggest and strongest players on tour. He hits it a country mile, is good with his long irons, can score on both par 4s and par 5s and surprisingly, has pretty good bogey avoidance.

So why hasn’t he won more? PUTTING!

Watching Finau with a putter in his hand can be frustrating to put it nicely. For a guy who struggles with his putter as severely as Finau does, it is astonishing he has made 18 consecutive cuts. This includes three top-25s here at Torrey Pines in his only three starts, which is highlighted by his fourth-place finish here last year. The man is consistent, with a game that is explosive.

IF Finau can continue to find a way to gain strokes on the greens rather than lose them, WATCH OUT!

Don’t get me wrong, course history does mean something at Torrey Pines. Seven of the last nine winners have had a previous top-10 here. Elite players can break the mold though. Jon Rahm won at Torrey Pines last season in his first attempt, and I refuse to sit by and not back another elite first timer just based off of one stat.

Cantlay got his maiden win during the swing season out in Las Vegas at The Shriner’s Open. Torrey Pine’s South Course sets up that your scoring holes are the four Par 5s and a lot of the Par 4s you are happy to finish with a par. Cantlay ranks fifth in the field for Par 5 average, fourth in Par 5 birdie or better percentage, and 11th in bogey avoidance. He is a fantastic ball striker and checks out statistically across the board.

Woodland at times seems incapable of doing what it takes to get a win, but I will bite the bullet here at what I consider to be a good number on a course he loves. Two years ago he was quoted saying, “I feel I have a huge advantage out here.” He ranks ninth in driving distance in the field, and ninth in strokes gained approach, which is a rare combination to possess. Bogey avoidance and putting always seem to be his undoing. Just like Finau though, Woodland is a much better putter on Poa Annua greens. Since 2013, he has gained 1.755 strokes, ranking him 22nd on tour. He has three top-20s in the last four years, one of which yielded him a top-10 finish.

Vegas appears like he has made tremendous strides when it comes to consistency, making 12-of-13 cuts. He has two top-11 finishes in his last two tournaments and three straight top-30 finishes here at Torrey Pines. Things seem to be finally clicking for an extended period of time. Vegas has always been known for his driving distance but also possesses superb long-iron play that allows him to score at will on par 5s. Putting tends to be his undoing but watch out if he gets hot on the Poa greens.

Uihlein has been a bit up-and-down playing in the United States, but this tournament sets up nicely for him. He is long off the tee and great with his long irons, both of which should give him many birdie opportunities. Uihlein ranks top-20 in the field in bogey avoidance, par-5 scoring, par-5 birdie or better percentage, proximity 175-200, proximity 200+ yards, and ranks 22nd in driving distance. Overall on my spreadsheet, he ranks out 32nd when considering form and history, but he grades out 10th when just considering stats. At 80/1 he is worth a look.

Chesson let a lot of people down last weekend. He was ridiculously priced, at as low as 30/1 at some books to win the CareerBuilder. He narrowly avoided missing the cut and disappointed during his weekend round to finish 42nd. His poor tournament saw him go from an overvalued 30/1 selection, all the way to a 100/1 long-shot here at Torrey Pines. The field is more difficult this weekend, but the drop feels too drastic. I view Hadley as a better top-10 or top-20 selection, but 100/1 is an exceptional value.

I narrowed this pick down to my top-five long-shots on the spreadsheet. Kevin Tway (22nd), Luke List (37th), Seamus Power (40th), Sam Burns (41st) and Trey Mullinax (46th). I will roll with my highest rated guy. All these players have the possibility of missing the cut, but one stat or another have propelled them into the top-50 for the cheat sheet. Tway has two top-45 appearances here in his last two starts. He is fifth overall in driving distance, and being excellent on the par 5s could allow Tway to make a run towards the top of the leader-board.

I am not a big proponent of laying large juice on bets, but a couple of them seem poorly priced.

Jason Day -140 over Tiger Woods
While I don’t trust Jason Day entirely because of bogey plus rate and the ever-looming injury potential, I believe in Tiger Woods 10000x less. Inconsistency will be at a premium for Tiger Woods until he finds some rhythm. Making the cut feels 50/50 for Woods.
Day Grades out 11th on my spreadsheet.
Tiger no ranking because of no trackable data.

Tony Finau +105 over Brian Harman
I don’t love pairing two golfers against one another who are both top-25 options on my spreadsheet, but in this circumstance, I think it is the right thing to do. Tony Finau loves this course, and I would be shocked if we don’t get another top-25 performance from him. Brian Harman is being propelled on the spreadsheet from his recent form. Torrey Pines is not a course that fits his game, and his overload of golf may finally catch up to him here.
Tony Finau 1st on the spreadsheet
Brian Harman 23rd on the spreadsheet

Chesson Hadley -110 over David Lingmerth
This is one of the biggest head-scratching match-ups to me. Hadley is being completely disrespected after his performance last week. A performance that still saw him make the cut and finish in 42nd place. His last five starts have yielded a third, second, fourth, 37th and 42nd place finish. Lingmerth is the poster boy for inconsistency. With a long course that doesn’t even fit his game, I am perplexed by the number.
Chesson Hadley 12th on the spreadsheet
David Lingmerth 95th on the spreadsheet 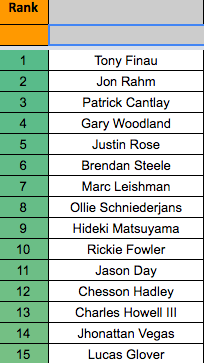